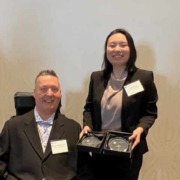 June 14, 2022: The Canadian Bar Association, BC Branch honoured several outstanding BC lawyers in 2022, all of whom have contributed to the cause of justice. This year’s deep pool of nominations led to a record number of six award recipients.

“The CBABC Bar Awards allow us to recognize our colleagues’ dedication to improving the practice of law and their commitment to the people we serve. These six individuals exceed expectations by doing good not for accolades but solely because they believe that it is right. CBABC extends congratulations and gratitude to this year’s award winners,” states Clare Jennings, CBABC President.

This award celebrates CBABC members who have succeeded in advancing equality in the legal profession or generally in British Columbia.

Ken Kramer, KC has advocated tirelessly to improve the lives of those with disabilities and the senior community. As a lawyer living with disability, his profound personal and professional knowledge have helped establish seven Elder Law Clinics across the Lower Mainland. He also negotiated with the BC government to allocate over $25 million to the home care community in BC.

Audrey Jun has made a remarkable impact on the Asian-Canadian legal community by directing But I Look Like a Lawyer, an award-winning documentary that masterfully weaves the lived experiences of pan-Asian lawyers. She routinely presents at disability and trust workshops, and has contributed to the yearly Elder Law Update of Continuing Legal Education BC. 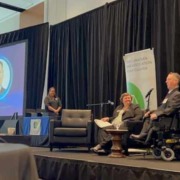 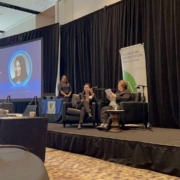 In memory of Harry Rankin, QC’s immense support of access to justice for the poor, this award acknowledges commitment to pro bono service.

Tim Louis has followed in the footsteps of Harry Rankin himself and devoted much of the past 40 years to providing pro bono services for those in need. He was the driving force behind the implementation of HandyDart and co-founded the Disability Alliance of BC and the BC Public Interest Advocacy Centre.

Edward Wong routinely offers pro bono services through Access Pro Bono and his own solo practice, representing women experiencing domestic violence as well as racialized clients. He also mentors junior lawyers, most of whom are persons of colour working in small or solo practices and committed to representing financially-challenged clients.

This award recognizes innovation in rethinking the model of legal services, in challenging societal, institutional or historical barriers, and in serving the bar.

Sara Forte designed Forte Workplace Law to encourage clients to tell their story by focusing away from the billable hour, offering services at flat rates and bundled packages. Her ventures include Not Your Average Law Job, which highlights the stories of lawyers who have taken up alternative legal careers, as well as StandUP Teams, a training program to prevent workplace harassment.

This award honours a CBABC member who has demonstrated outstanding dedication and service by contributing the critical behind-the-scenes work for community-building.

Vanessa Werden has dedicated an enormous amount of time as an avid mentor and champion for women in the construction industry and legal profession. She was instrumental in granting $20,000 in bursaries for women pursuing trades or construction-related education and training, and has been an influential volunteer in the CBABC Young Lawyers and Construction Law Sections.

The 2022 CBABC Bar Awards were presented on Saturday, June 11 at the CBABC Provincial Council meeting.

The Canadian Bar Association is the professional organization representing more than 36,000 lawyers, judges and law students across Canada with over 7,600 members in British Columbia. CBABC members practice at the forefront of the justice system, providing services to British Columbians in every area of law.

Where to find us

Disability Trusts – The Role and Choice of Trustee